I have finally managed to complete my 2nd attempt at the jukebox / music player using a Raspberry Pi, Music Player Daemon (MPD) and Client175. This time using ArchLinux instead of Raspbian.This was also prompted by firstly having my initial USB hub start to smoke (be careful of leaving cheap hubs permanently powered) and secondly, the fact I managed to destroy the installation by attempting to uninstall all things X from the system. Apparently my face was a picture when I saw the packages "mpd" and "als-utils" being automatically removed! 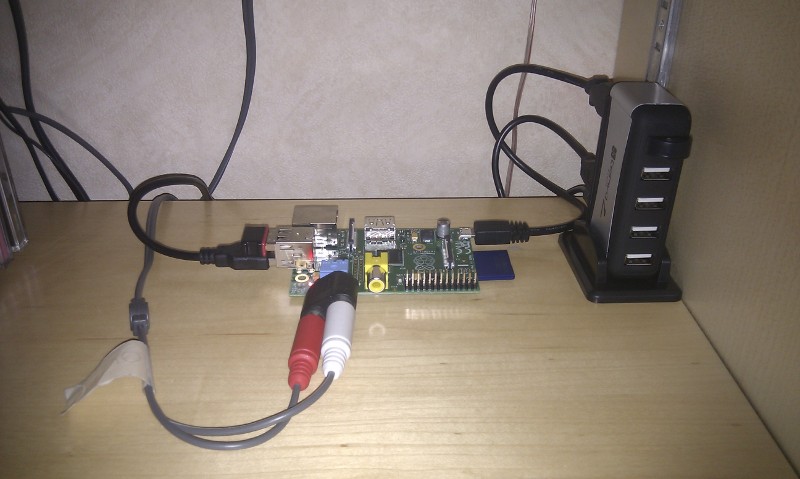 While Rasbian is okay and based on an OS I know intimately (Debian), the appeal of ArchLinux was how streamlined it is out of the box. However, unlike the Raspbian version, I endured a lot of irritation and frustration as I struggle to find information about the simplest of task (e.g. Static IP addresses). Rather than detail all the painful circles I went round to get this project to this stage, I will simply highlight the initial problem and solution.

The ArchLinux image is available from the Raspberry Pi's Download page. Once downloaded I simply inserted my SD card into my laptop and executed the following commands: (Sorry, I'm a Linux user, so if you use windows you should check out this page)

You should be aware that above device path (/dev/mmcblk0ï»¿ï»¿) could be different from machine to machine.

Once this has been done, simply pop the SD card out of you computer and slot it into the Raspberry Pi.

For this version, I decided to add the added challenge of do this build completely headless., so the following information was quite usuaful.

So using this information I was simply about to ssh onto the Raspberry Pi. However, if you have no way of finding this out and want the similar challenge, you could try a ping sweep (I use nmap -sP 192.168.1-254 and see what IP addresses are ping-able.

Once I logged in, I then proceeded to also:

Like Raspbian, installing the software was extremely simple. I had the basic software all installed pretty much by this command:

However, there was a bit of configuration that needed completing.

While you think it would be abvious, it was to me and caused a bit of head scratching.

Also, as I use a static IP address (see WiFi section), I have also added to the following lines to the mpd.conf file:

Note: First pain occured with starting the player on boot. While it was starting, none of the clients were able to communicate and running systemctl status mpd returned an error and failed to start:

The issue was that mpd was trying to start prior to the wireless connection being established. The solution was to edit the /usr/lib/systemd/system/mpd.serviceï»¿ and add change the After= line to:

I really like this client as you can even edit the mp3 tags. However, I'm on the look out for a mobile friendly web UI, but may well try writing my own. Due to ArchLinux being such a thin install, you will need to install python, this is achieved by the following command:

Now let me introduce the second pain. Getting Client175 to start on boot.

I started off trying to replicate the SysVInit rc.local method, but no matter what I did I could not get Client175 to start on boot. This caused me enormous amounts of frustration, as I found that the documentation seemed to be sparse on this subject and use forums seemed to be full of people informing me "don't use rc.local. It's an ugly hack and there's always a better way.ï»¿" but never offering me information as to what the "better way" was. Eventually I worked it out that I should create my out systemd config file:

So, to keep things simple, I have only documented what I did to get it working, not everything I tried to do.

Finally, you should be able to execute the following:

Note: As soon as you have issued the reboot command, you need to whip the wired network out of it's socket.