So my new has arrived. It's the Motorola RAZR i (demo site) and the first phone I have drewled over the look of in quite some years. I was not moved by the iPhones as I had a 1st generation iPod Touch and thus saw nothing but a fattened up iPod (The iPhone4/5's are a better design). Motorola seem to have a long line of stylish/sexy phones. I always wanted the original RAZR V3 but was too afraid I'd sit on it and snap it. There is an interesting article on the history of the RAZR brand over at PCMag.

My last phone was a HTC Desire and while not as sexy as the iPhone4 which was out at the same time, it was an Android OS phone and the reviews were quite something, especially as Google had withdrawn the original Nexus phone due to poor sales. The HTC Desire really set the bar for Android phone as was immediately surpassed by the likes of the Samsung Galaxy S, although only due to HTC's short sightedness on the storage space. 512Mb is simple not enough, especially when filled with a lot of applications that can't be uninstalled and may never have been used. Anyway, this is not a review of the HTC Desire, although there will be quite a few comparisons. 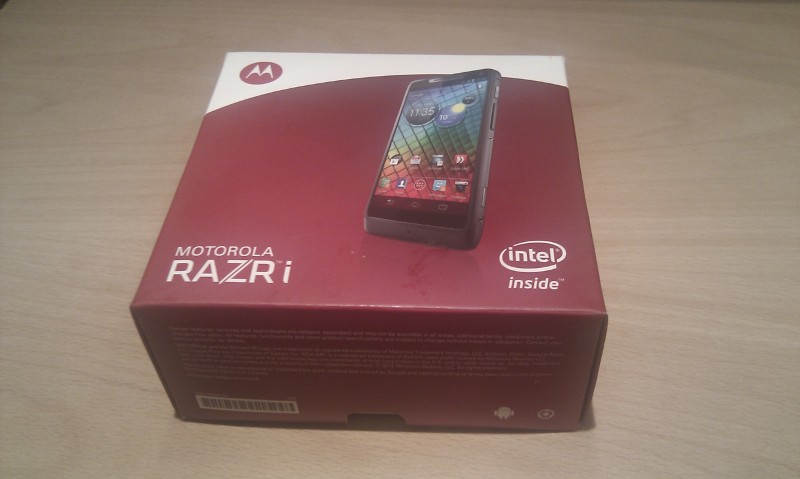 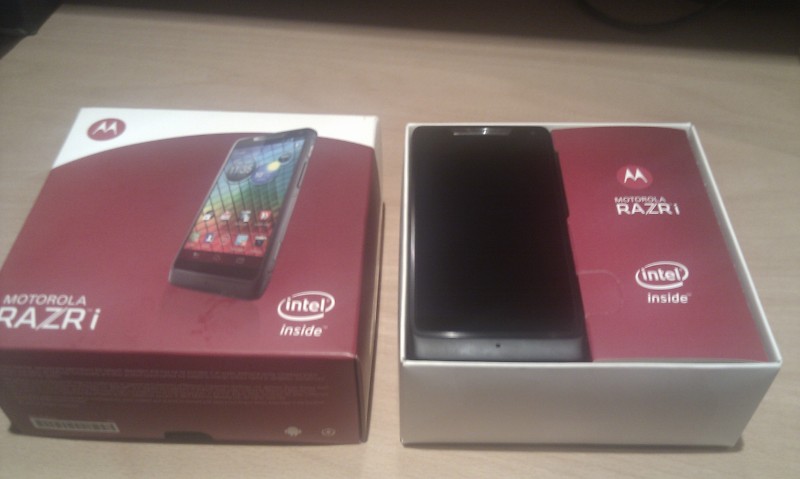 The box is well presented and well protected and it comes with a headset, charger and data cable. What more would you want.

I eagerly grabbed the charger and plugged it in, which showed me the first feature of this phone and the first difference between the HTC Desire and the Motorola RAZR i. When plugged into a power source and the phone is not switched on, the phone just charges rather than automatically booting into the OS. Pressing the power button does not actually turn it on, you have to press and hold for a moment. Now, some people might find this annoying, but this is a relief to me as I often turned my phone off to preserver battery (e.g. while at the cinema) and would get frustrated when I felt the tell tail vibration that the phone had turned on.

The phone was fully charged in 1.5hours and ready to go, be it without a SIM. Why with out a SIM? Well, I had failed to notice that this phone required a micro-SIM rather than the standard SIM that was in my HTC Desire. Oops. 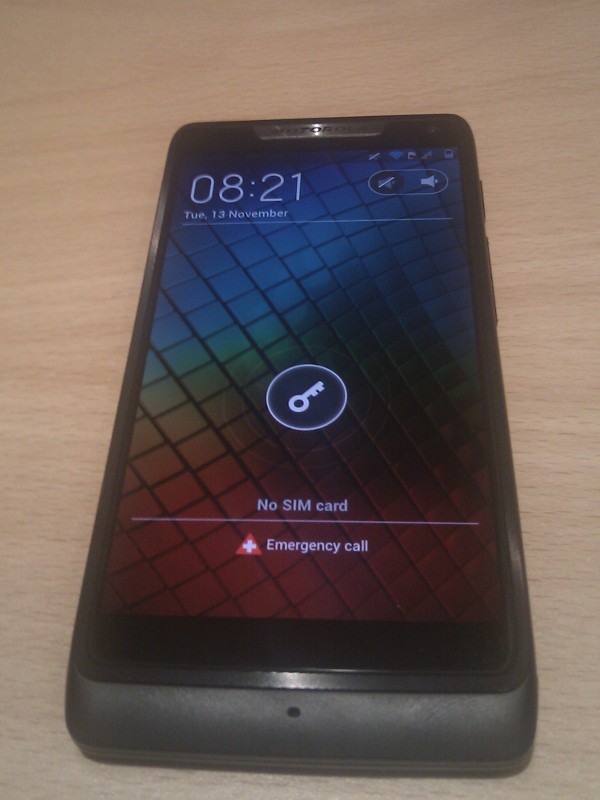 As you can see from the picture, the phone is quite happy to boot up and be used without a SIM, unlike other brands of phones. So for the purposes of the rest of the review, I will be treating this phone as just a WiFi phone and will update this article once I know what the call quality of the phone is like.

So far the first impressions are very good. It's very light and very responsive. Coming from the HTC Desire it feels a lot nicer in the hand and is lighter too.ï»¿ It is about half the thickness of the HTC Desire, but a bit longer. It's quite an odd feeling losing the hardware buttons that the Desire sported along the botton, but it makes for a much more slick feel.

The only disapointment is, what looks to be all screen is about 1cm shorter, as you can see from the picture, but the screen is big enough

The next surprise came when I looked at the pre-installed apps. I was most surprise that Motorola had not really installed any. Unlike HTC that seemed to try and cram as much crap into the ROM image as possible, rendering the 512Mb storage to realistically only 150Mb. Of course this is not a problem with the Motorola RAZRi, as it has an 8Gb internal storage and while it would seem that the out of the box available space is just over 5Gb, but still more than enough for plenty apps.

One more thing to note here, is that Amazon, Tesco and the sales person in the phone shop all stated that this phone can not be expanded using a microSD card. This is simply not true. There is a slot and I believe 32Gb cards work just find, but as I don't have one bigger than 4Gb I can't comment.

So the phone was fully charged, so I decided to test out using the phone. Well that's what it was bought for! My first surprise was the auto brightness feature, yes the Auto brightness actually works!ï»¿. This is the first phone/device with this feature that I have seen that actually adjusts brightness to an acceptable level (the dimest) in a dark room. All other devices,  including HTC Desire, iPhone 4 and iPod Touch, have to have the auto brightness setting turned off and then manual adjusted down to their lowest setting.ï»¿

I think the guys at Intel have done pretty well, as the phone is pretty slick. I've been used to waiting a few seconds for applications to launch on the HTC Desire, so when the apps on the Motorola RAZRi just spring to life, I was more than pleased. I have bought numerous new computers over the years and the first boot is always a disappointment that there is never any really noticeable speed difference between the new and the old. However, this simply is not the case for the Motorola RAZRi and it's Intel processor.

Next I thought I'd compare the cameras of the HTC Desire and the Motorola RAZR i:

Be warned these are the raw jpg's from the phones and thus are fairly big. But I think the verdict is pretty obvious, the RAZR wins hands down.

The battery is something else too. So far it's been running 27hours and I've been playing with it quite a lot and I still have 35% battery left. The HTC Desire would give me 12hours if I was lucky.

Edit: Phone back on charge after 35hours of usages

I guess we shall see how things go on, but certainly first impression is that this is a most excellent phone